Vegan in Copenhagen (and Paris) 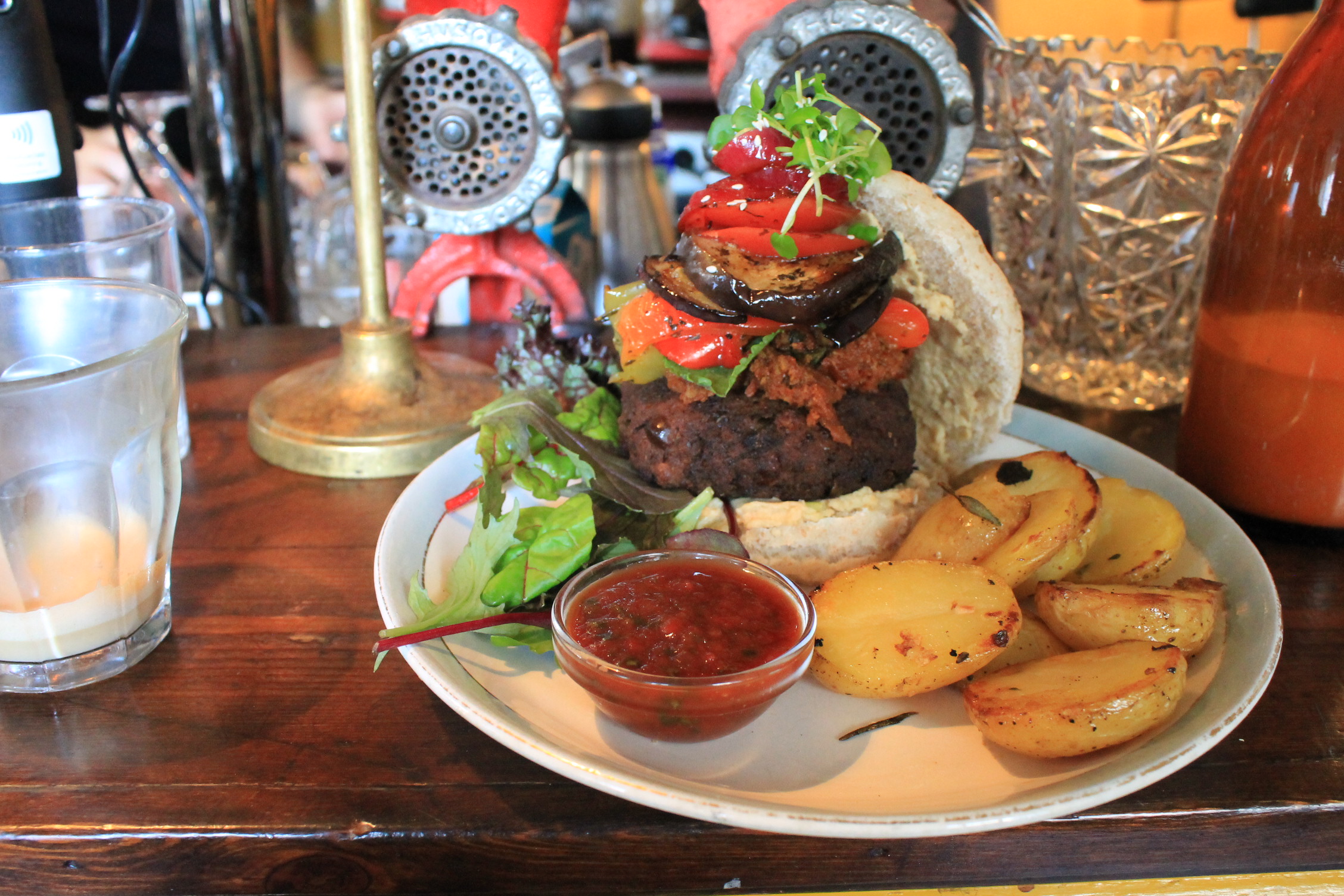 I am so excited to share with y’all the delicious foods that I enjoyed in my visit to Copenhagen and Paris from October 2016! Honestly, some of the best food I’ve ever had! The Danish take a lot of care to use local and seasonal ingredients. And everything looks like art, it’s so beautifully presented! 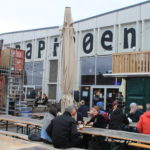 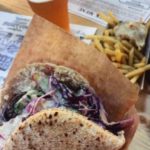 I can’t promise you’ll be able to find this delicious falafel in the future—at least not in the near term. Copenhagen Street Food is a pop-up street food market on Paper Island, which is slated for redevelopment. Once development has finished, the street food component is expected to return to the site, but the details aren’t set. That being said, I had an absolutely delicious falafel from Fala Fala.  I joined with a Danish family for this meal and had a very enjoyable chat—a fantastic first night!

My first breakfast, despite it being quite cold outside (an understatement) I headed to the Organic Boho for an acai bow. I took a selfie later that morning and realized the acai was still purple on my lips! Whoops! The bowl was not only beautifully presented, it was delicious and refreshing. A great way to start the day!

RizRaz was a surprise (albeit, a slightly pricey surprise!). While they’re not a vegan or even vegetarian restaurant, they offer a 100% vegetarian lunch buffet—all you can eat, of course! It’s delicious and has plenty of vegansk options that are clearly labeled. Again, everything is so well prepared!

I was staying at the Generator, so after a long day out walking (and having managed to sprain my ankle on the first day!) I stayed in and ordered the beet root veggie burger at the Generator in Copenhagen! Hold the cheese. 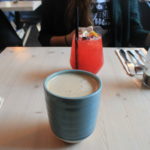 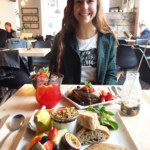 One of the most exciting meals of the trip was grabbing brunch with an online vegan friend who just so happened to also be in Copenhagen! We dined at Souls. I met up with @plantbasedbackpacker for a delicious brunch—I ordered the breakfast plate, which was a bit of a sampler, and a coconut latte on the side. This was delicious! If it weren’t a bit of a hike from where I was staying, I would have certainly gone back!

I was cold, my foot was killing me, and I wanted a pick-me-up not far from the hostel. Enter: Hafnia Bar. I ordered the vegansk special, and it was exactly what I needed (of course, I still sat next to an open window on that chilly day!). Kale, chickpeas, lentils, black beans, pinto beans, red pepper, sweet potato, and I think some carrot, too? Warm and delicious! 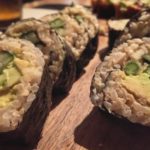 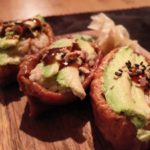 The evening came around and my foot still hurt. Ugh. I managed to hobble not far from the hostel to enjoy some sushi at Green Sushi! Goodness! Would you look at the adorable little tofu nigiri boats I ordered! Dinner was delicious, satisfying, and overall pleasantly surprising! I ordered the 14pc vegan set with brown rice. Two types of nigiri (shown here) and 2 types of maki: asparagus tempura and a mango and umeboshi maki. If I had more time, I would have gone back here as well! 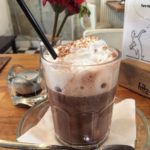 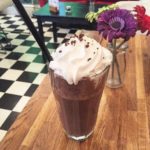 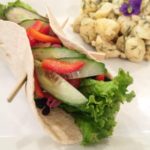 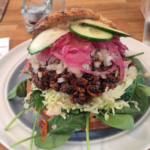 Yessss… on my first visit to VIDEO VIDEO, I ordered the Lucky Luke, made from Minced m*at (lentils and soy protein), spinach, marinated cabbage, picked onion, onion, and cucumber. It is amazingly delicious! So good! And both people at the table next to me ordered it so I feel good about recommending it! I also had the hot cocoa (everything I wanted, and more) and went back a few days later for the Thomas Hewitt wrap, potato salad, and a choco-coffee milkshake (warning: not actually a milkshake; it was just chocolate milk!! womp womp!). 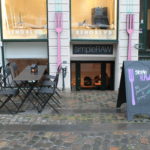 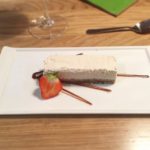 You know what I love? When you’re wandering the meandering streets and stumble upon a restaurant you were planning to visit anyway! I knew SimpleRAW was a vegan option but I didn’t know where they were until I turned around in a plaza and there they were! Everything is raw and vegan! I ordered the zucchini noodles. The chickpeas added a nice crunch and the peppers a nice heat. Very delicious!

It was late and I didn’t need caffeine, but I wanted to sit out under a heater like the locals do, so I grabbed a coffee from MJ Coffee. Though, I ordered a small/single—again, I only wanted something to have while I sat outside like the Danes do—but it was huge! I shouldn’t have ordered anything caffeinated. Oh well. So be it. It was too early to turn in and too late for a snack.

*Most coffee shops had soy milk or another alternative!

On my third morning, I had two breakfasts! First, from Land Bageriet/Naturalbageriet. It was a moist, sweet, and delightful cinnamon roll! I also ordered the rum balls to-go. Brilliant decision! Do not go to Copenhagen without getting these balls!

Breakfast number two: The Acai + Chia bowl from Grød at Torvehallerne (the glass markets). I replaced the skyr (yoghurt) with coconut chips. If you go to Torvehallerne, you can probably skip the western pavilion as it’s mostly animal products.

Yes! This was definitely a highlight of my trip. Døp is a hot dog stand on a shopping street. Among the animal hot dogs, you’ll find a vegan tofu dog! And it’s wonderful! You’ll want to order all the traditional fixings, I just specified “as long as it’s vegan.” Note: this place is cash only!

Finally, a sunny day! And what better way to celebrate than to order an absolutely delicious “Little Miss Sunshine” burger from Kalaset. How you’re supposed to eat this without a knife and fork…I haven’t a clue, but it doesn’t matter because every bite is still delicious.

This little gem is a vegetarian restaurant turned vegan! At Café N, I ordered the snack tallerken (plate) and it was delicious. Café N, as of January 2016, is all vegan!!! I would definitely recommend this! It is small and does get busy at night!

A local friend knew that I liked avocado toast, so recommended Altier September. This is not a super veg-friendly venue, and it smelled a bit of egg (as I watched those around me all dig into their cooked eggs…it was a bit difficult to be in the space). However, they had an absolutely delicious (but incredibly expensive) avocado toast! They also had almond milk for my cappuccino. For the price, I might recommend it only if you’re craving avo toast, but it honestly was delicious!

I had a scrumptious meal from Morgenstedet in Free Christiania. It’s a vegetarian cafe, with very friendly staff and a nice vibe overall. I ordered the rice dish—I think the menu changes daily. It was so good!

I popped into a new vegan market, the Vegan Shop (Den Vegansk Butik). They are itty bitty but have a good selection of spices, chocolates/candies, and refrigerated goods, plus some personal care stuff. If you live in Copenhagen or are visiting, check them out!

So I was all prepared to exclaim how all of the food I ate in Copenhagen left me feeling good about myself, as if everything were fresh ingredients and largely whole foods based meals. Then I ate at Friends & Brgrs (WARNING: I’m not linking to the website because of the graphic video that might be offensive to vegans!!!). Don’t get me wrong, it tasted great! I loved their vegan burger with vegan aioli, but it has the same grease level as an American veggie burger! I chose Friends & Brgrs based on its location on the way to Tivoli (also, riding roller coasters after this probably isn’t advisable but it worked out for me!) and because I wanted to try something new but also not raw or cold because I was freezing from biking all day. The vegan option is clearly labeled as such, and they have a vegan aioli option. It’s right along a major shopping street so very convenient for tourists.

I wish I could have spent all morning at Kaffestuen Vesterbro. Alas, my schedule in Copenhagen was jam-packed! I also wish that (1) Kaffestuen in Vesterbro were closer and that (2) I had tried them earlier in the week. I asked for their suggestion for a vegan dish (they were recommended to me and also advertised as vegan-friendly on the signs outside, but are not 100% vegan) and they suggested the tofu sandwich. It was delightful and I ate the whole thing! Scrumptious! *Nearby there is vegan ice cream shop, Nicecream. I ventured over, only to find it was closed for renovations. If you’re visiting, try to squeeze in some dessert after!

To be honest, I don’t understand the hype. Sure, it was a good juice, but probably not worth the pricetag or the seriously loud music (it is really good music, though!). Nevertheless, Joe & the Juice is everywhere and they have some good options for vegans. I just prefer to eat local fare when I can. At the airport location, I ordered the Energizer. It was tasty! The ginger flavor was just enough to not be overpowering.

I have no idea what we ordered, or from where. But it was vegan-friendly (everything but the feta). I was really winging this vegan in Paris thing…I had a friend studying there to fall back on, thank goodness, because I know absolutely no French!

The food court above the Louvre looked to have a lot of vegan options. All the stalls are essentially the same restaurant (with the same ordering system), but feature different cuisines. I wasn’t terribly thrilled with my selection. I ate at Salam and ordered their three sides/salads. It wasn’t quite what I wanted—the flavors were a bit blah. But at least there are vegan options! The food court had plenty that looked edible ?

Hands down, the best meal of the trip! I walked through some quaint market streets in Paris to arrive at Brasserie 2eme Art—a vegan restaurant. I ordered the risotto, and it was absolutely delicious!!!! When we couldn’t get into Gentle Gourmet late that evening, we went back here!

Yummy! A vegan cupcake from Cloud Cakes hit the spot after my risotto. It was delightfully sweet!

On my flight home, I thought I’d give this a shot! From The Food Doctor; it was actually really REALLY good! I would love to have it again! If you have access to this near you, I totally recommend it! The ginger ale was too tiny for the cost.

All in all, it was a great trip and a great experience eating throughout Copenhagen and Paris!! I hope to go back soon!