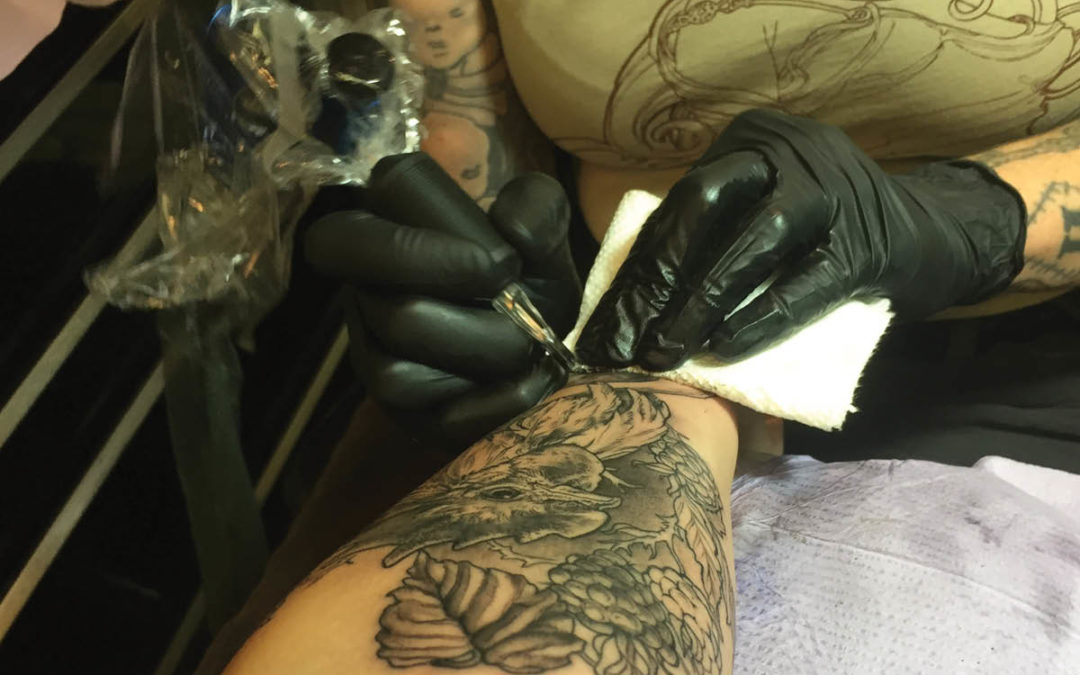 Tattoos are a bold form of expression. Oftentimes, they can help their wearer reveal stories and characteristics about themselves that are meaningful, but might not otherwise be obvious. In this way, tattoos are personally significant. For vegans, what goes into the tattoo might be just as important, if not more so, than what the tattoo portrays. And so we ask ourselves, is there such a thing as a vegan tattoo?

All-in-all, I have seven tattoos—six of which were done by artists at Have Fun Be Lucky Tattoo (HFBL) in Hampden, Baltimore. One of my most recent tattoos is vegan-themed—but is it a vegan tattoo?

The concept is certainly ‘vegan’—a chicken and cow surrounded by fresh raspberries, a ripe avocado, and heart-shaped carrots to represent my love for all animals as a motivation behind my veganism. However, tattoos are not necessarily vegan. So let’s take a look at my latest tattoo, from start to finish, as an example:

My Tattoo Process—Is It Vegan?

There are a few steps to getting a tattoo. You may go through a process to select a design, but once you step into the shop to get the work completed, there are some components to be concerned about.

Why it’s not always vegan: The transfer paper by which most artists will create the outlines for your tattoo may contain lanolin (sheep’s wool).

At HFBL: HFBL’s transfer paper is sourced from Spirit Tattoo Products. Through email, Spirit confirmed that all of their products are vegan-friendly, and they even have a dedicated “vegan line” for artists interested in demonstrating this for their clients.

Why it’s not always vegan: If the gloves are made with latex, they’re not vegan. (If you’re suddenly concerned about your condoms, fear not. There are options!) Latex is produced using casein, an animal product.

At HFBL: There are, however, latex-free gloves (some folks are allergic to latex anyway). Indeed, HFBL uses latex-free, nitrile gloves.

Why it’s not always vegan: Before your skin can be tattooed, it must be thoroughly cleaned. Many tattoo parlors (mine included) use what’s called “green soap” to sanitize the area. Green soap is not a brand; rather, it’s a general classification for the type of soap. Green soap is used again and again throughout the tattooing process to moisturize your skin before shaving, and to keep the area clean while ink is applied. But what is it, and is it vegan? Green soap contains glycerin and alcohol. However, as the Bite Size Vegan points out, “the vegan society has not been able to get confirmation for green soap producers as to their glycerin sources and potential animal fat content, and the information online is highly conflicting.”

At HFBL: They use Cosco Green Soap. On December 4th, I contacted Cosco and a representative informed me that their soap uses a plant-based glycerin as well as plant-base oil.

At HFBL: Unfortunately, at my shop, they use A+D Ointment—not vegan-friendly.

Why it’s not always vegan: tattoo inks may include animal products, such as bone char; glycerin from animal fat (rather than plant-derived); gelatin from skin, bones, and connective tissues of animals; or shellac from beetles (Bite Size Vegan).

At HFBL: The biggest tattoo concern, for me, was the ink that I would put into my body and carry with me for the rest of my life. I rest assured knowing that the inks used at HFBL are vegan and contain no heavy metals! HFBL largely uses Waverly Color Co. (a local company! yay!), but also carries products from other ink suppliers. Though ink companies will often not disclose all of their ingredients (proprietary reasons), HFBL has done extensive research to ensure they’re purchasing inks labeled as vegan.

Why it’s not always vegan: Many aftercare products include beeswax, lanolin, or cod liver oil.

At HFBL: The HFBL aftercare slip recommends using the non-vegan Aquaphor (though, the only aftercare product actually sold in the HFBL shop is vegan). Once you leave the shop, however, it’s up to you to decide how to care for your new tattoo. With my latest tattoo, I wanted to test out a few vegan products. I sampled the following vegan aftercare products:

Hustle Butter Deluxe was by far my favorite (it smells so nice!!), and I appreciate how portable 4 Star Tattoo Butter is. At the same time, I feel like After Inked and the Fanciful Fox cream are great for longer-term, routine care. I’ve also used Nat-A-Tat2 tattoo care, and I thoroughly enjoy their tattoo balm.

Of course, there are some other unfortunate ways that may make tattoos non-vegan. For instance, apparently some artists train on animal flesh. Unsurprisingly, there are better alternatives to practicing on animals. Of course, on willing human friends, but also, there’s now a “skin book” which is a notebook for practice.

Is Mine a Vegan Tattoo?

I wanted to be transparent and explain that not everything about my tattoo may be vegan, and I’m explaining that here so you can make choices that are aligned with your values. So, if we look at my tattoo, here are the factoids:

The verdict? Well, that’s really for me to decide and come to terms with. I do feel comfortable with the precautions and product selections of my shop. I know that my artist is conscientious and considerate of what’s important to me as a client, and I’m happy that she and I share very similar values. She really is an amazing woman all around. I do think there are some things that I could do differently in the future: such as coordinating ahead of time to request or provide my own cruelty-free ointment. When it comes down to it, I know my tattoo isn’t perfectly vegan, but it is vegan. And until 100% vegan tattoo parlors and artists are a common service, I value shops like HFBL for their work and compassion. 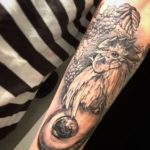 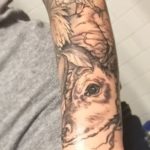 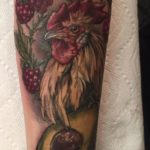