For Vegans Especially, Attitude is Everything 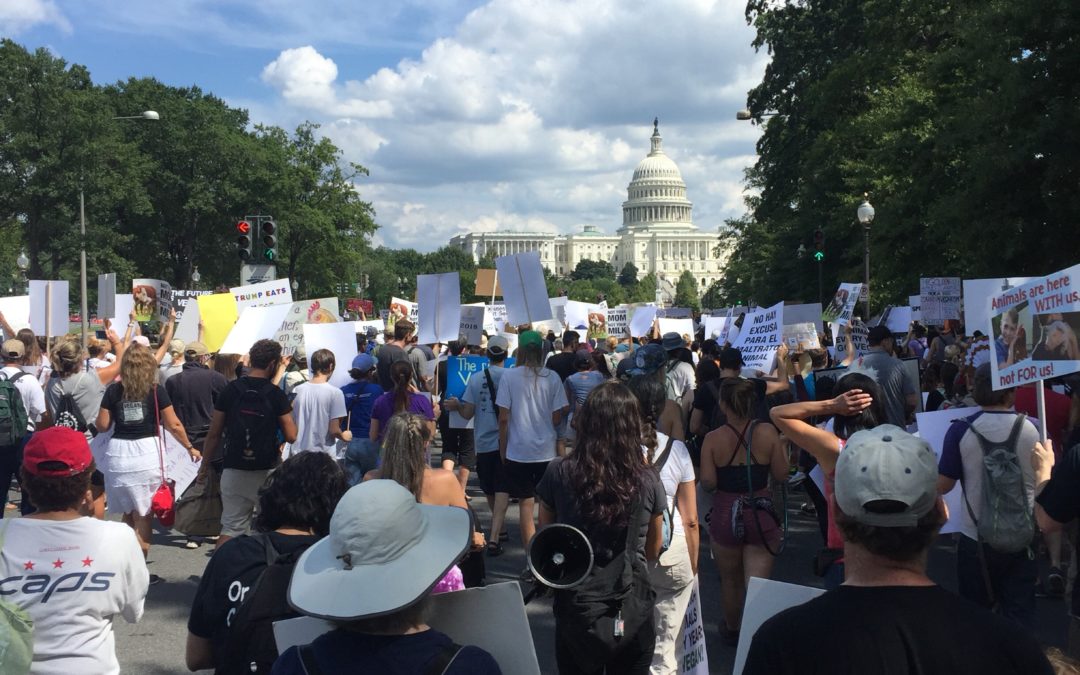 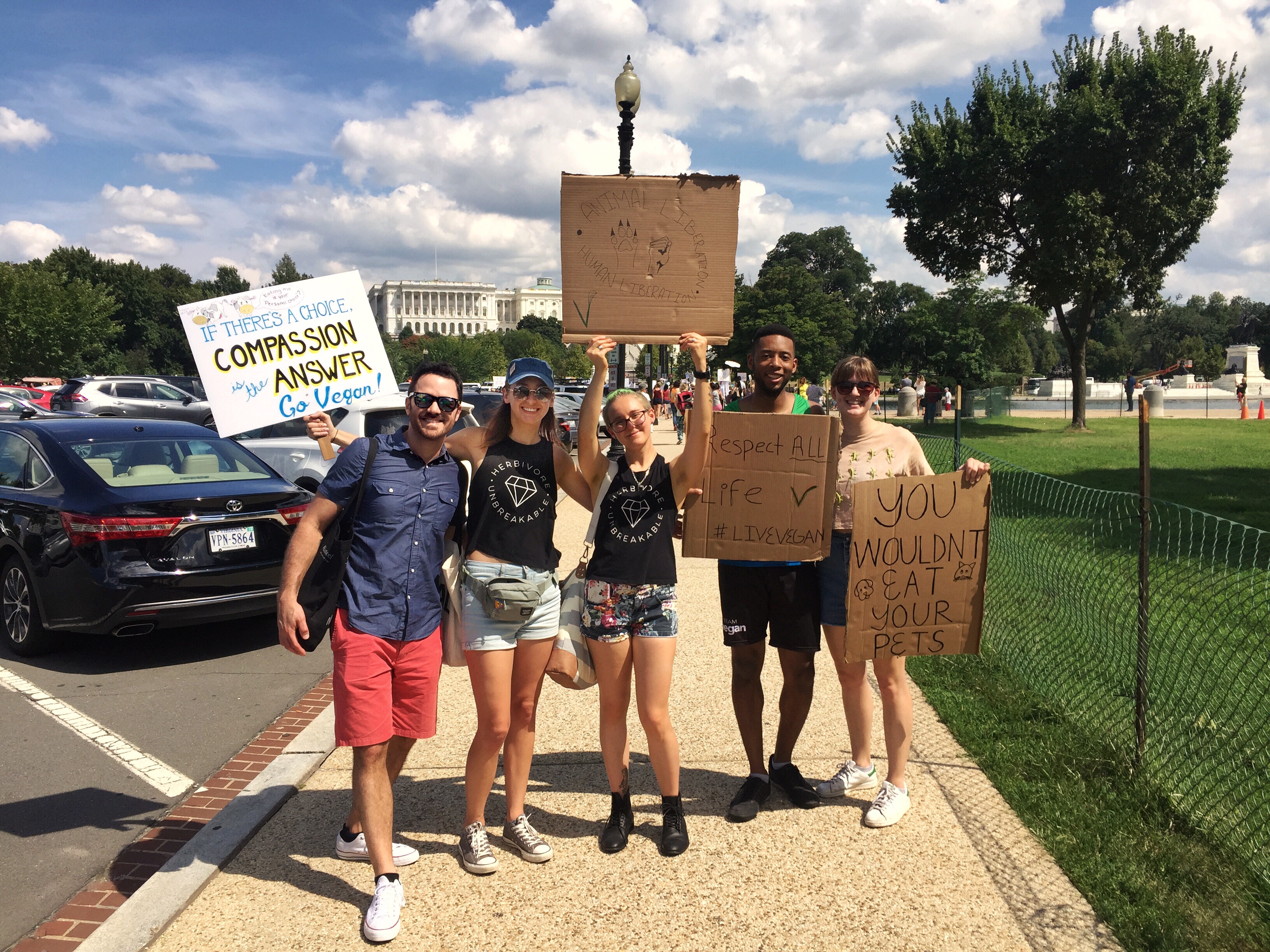 What motivated you to go vegan? Whatever your reason, I imagine you probably feel strongly about it. For me, the incredible respect I have for animals empowered me to remove myself from the systems of their suffering—whether food, entertainment, or any other system of exploitation. This respect for animals resonates with me so strongly that I want those around me to just get it..because I want them to feel the same sense of urgency to do something. But how can I communicate that most effectively? Turns out, I think my attitude plays a significant role in how well I can talk to others about veganism and animal rights.

Is it safe to assume that we all hate tone-policing? I certainly abhor when it’s directed at me. There’s nothing worse than being flooded with an emotion that I’m struggling to vocalize only to have the substance of my argument discredited because my delivery is just a wee bit too fiery. I’m mad dammit! And I have words! (It’s happening right now, isn’t it? Is my tone getting a little spicy? Whoopsies.)

Well, I know how frustrating tone-policing can feel. That said, I get it. I can understand why it might actually be a valuable tactic for making my case. Typically, once I’ve had a moment to collect my thoughts and identify what I’m feeling, I can acknowledge that, you know, maybe there is another and better approach?

You Can Catch More Smiles with Bee-free Honee

At the core, my veganism is about ending animal suffering. I want others to recognize how eating animals, wearing their skin and fur, exploiting them for entertainment, using them as test subjects, etc. is cruel, unusual, and unnecessary. When it comes to being a voice for the animals, therefore, clear delivery is crucial. If I truly want to see the end of animal suffering, I need to check my tone to get it done.

Standing Out at the Animal Rights March

Tone is on my mind. Recently, I was preparing to paint signs for the 2018 Animal Rights March in D.C and I was struggling to put my thoughts to words. As I was brainstorming, I wondered: should I be snarky? A little goofy? Matter-of-fact?

I ultimately decided that my message would sit better if it were kind. After all, if I expect people to behave compassionately, I should myself extend some compassion their way, right? I ought to walk the walk, as they say. Or, rather, march the march.

I ended up painting a double-sided sign. On both sides, I kept it gentle. On the front, I wrote, “If there’s a choice, compassion is the answer. Go vegan!” The reverse read: “Free hugs and cookies for vegans.” (And, yes, I delivered on both those promises.) 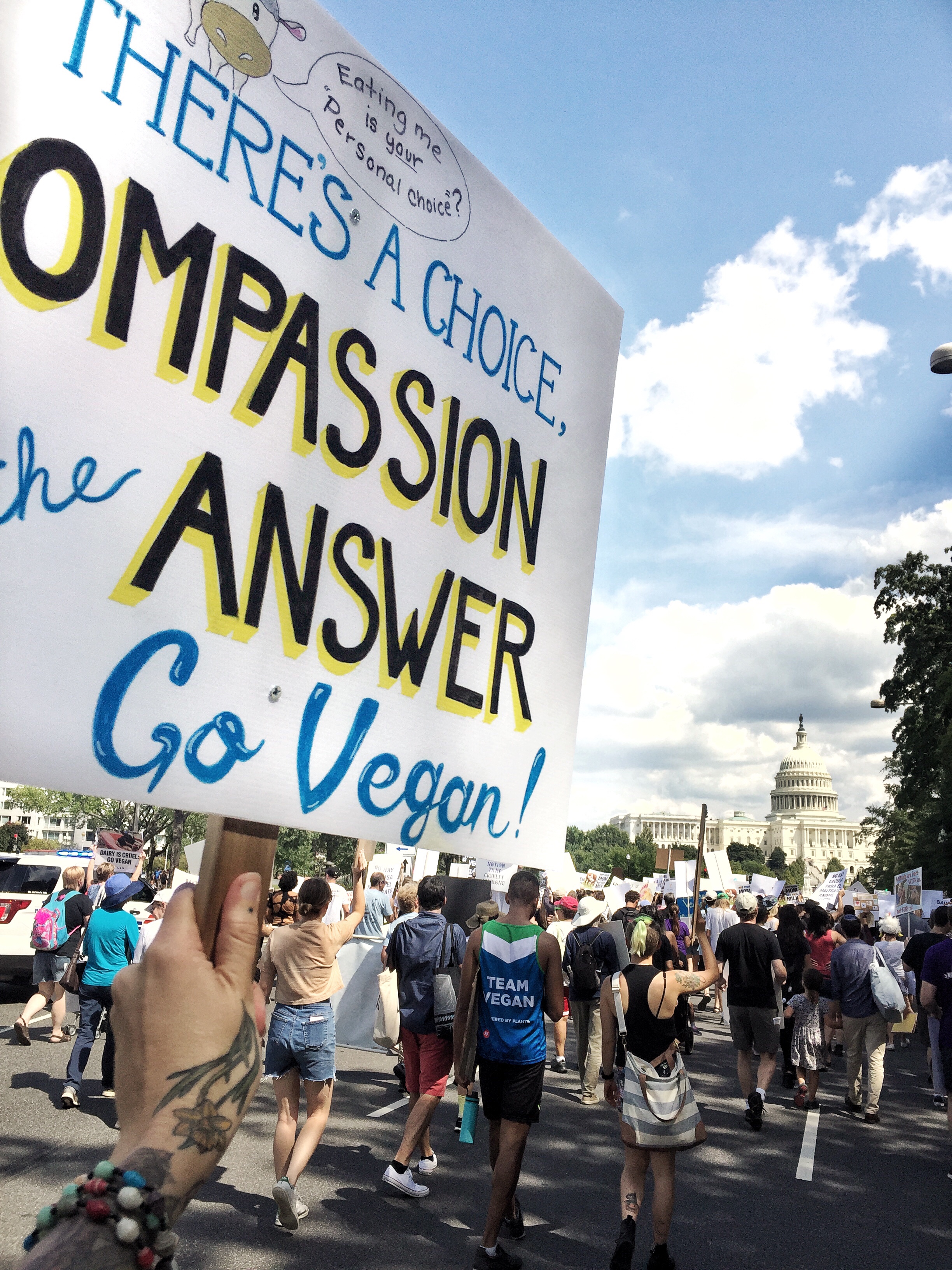 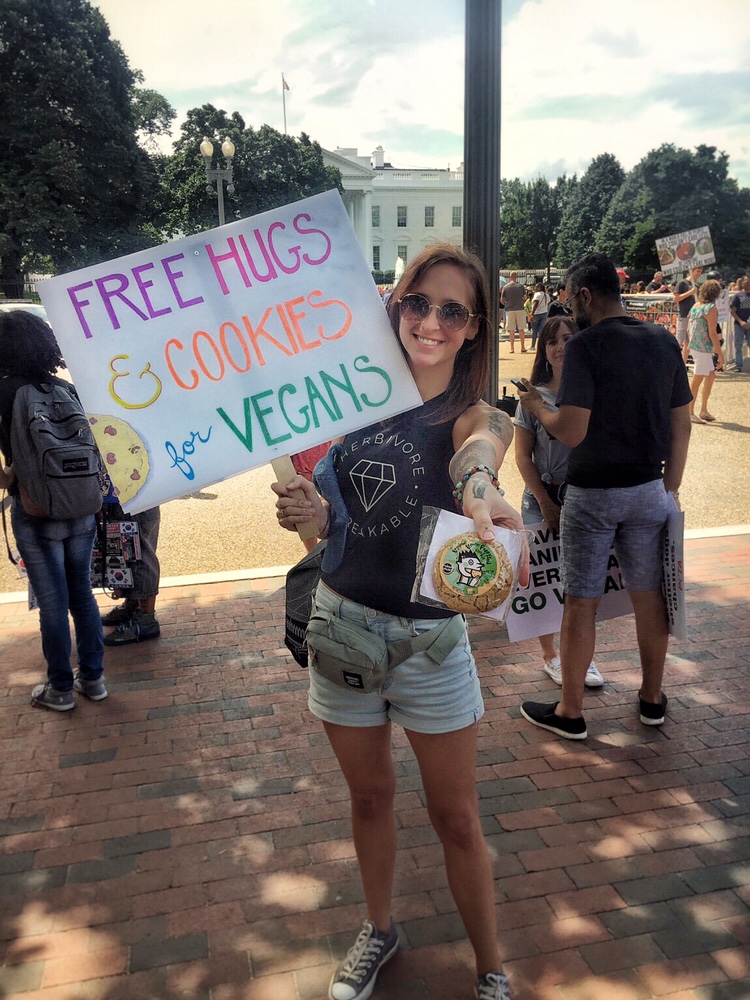 Lean and gentle—and this was intentional. I knew that a lot of the signs at the march would likely have a more aggressive, in-your-face statement. Now, if there’s a time and a place for that sort of thing, it’s definitely at an Animal Rights march! But I also understand that people are quick to write-off a message if they feel personally attacked. So in a sea of people shaming the world, I wanted to be a model for compassion.

Being a Voice for Animals

Animals don’t have a voice for communicating with people. Therefore, it’s up to us—their human allies—to translate their best interests into clear, defensible arguments. And, as with most things in life, attitude is everything—from how you carry yourself and feel in the moment, to how others perceive you.

As a voice for animals, I want to feel empowered to affect change. I want to demonstrate confidence that my vegan lifestyle is more ethical and rewarding than the animal-exploiting alternative. And I want others to see me as if I am an expert who knows a thing or two about removing ourselves from the mistreatment of animals. To achieve this, I carry myself with optimism and empathy. And I always consider the following tactics for effective communication.

Communication about any subject is surprisingly difficult. Even in our day-to-day lives, we find ourselves getting tangled up in the intricacies of effective communication. Of course, our emotions and passions only make it more challenging to communicate effectively. So what’s a passionate vegan to do?

A good rule of thumb is to deliver your message as if you were talking to your grandmother—a lesson which is actually two-fold. First, while you may be intimately familiar with the subject you’re discussing, you should expect that others are less-so. Animal welfare may be an entirely new concept for grandma. Therefore, it’s good to avoid jargon, to speak simply, and to be patient as grandma wraps her head around your ideas.

Secondly, when talking with grandma, you should be gentle. Be sympathetic at the same time as you’re being patient. Try to understand from where grandma came and how her path has led her to this moment. It’s certainly a very different path than your own; thus, her varied priorities and experiences provide a unique context for her decisions. Recognizing this, be a little softer than you think is necessary.

My guess is that your friend would take the latter approach and communicate about their favorite with a positive outlook. In fact, I bet if your friend did nothing but criticize your favorite spot the whole time, the thought of their favorite restaurant would leave a bad taste in your mouth (puns always intended). I know that if my friend started attacking me or my favorite restaurant, I’d start to think they were being snobby, and I’d resist the idea that their restaurant could be worth even a spec of my time.

Let’s apply this scenario to veganism and animal rights. It’s best to not shame people for any decisions they’ve made in life. The same goes for decisions to eat meat or exploit animals. We might understand what’s problematic about certain choices, but weren’t we in the same spot at one point? Few of us, after all, were born vegan. Try recalling the years prior to opening your eyes and heart which allowed you to make the change.

With an assumption that others simply haven’t yet opened themselves to the right information, I find that it’s more effective to talk about why veganism is beneficial than it is to point out the flaws of consuming or exploiting animals. Now, here’s a little homework assignment: Instead of talking about what’s wrong with eating and exploiting animals (because we all know there’s plenty to talk about there), how might we talk about what’s gained or improved by adopting a vegan lifestyle?

I know what you’re thinking: “Sure, it’s easy to be cheery when talking about favorite restaurants, but we’re talking about animal lives here!” This all sounds more upbeat than the subject warrants.

Of course, you’d be right. The subject at hand is significant. It’s not just a debate about personal food choices; we’re literally talking life or death over here. Our argument is against the slaughter of billions of animals—56 BILLION farmed animals each year, if I’m being precise! And the planet is being completely destroyed at the same time. So I understand the tendency to be angry and loud because, quite frankly, I’m angry and tired of being unheard myself!

Alas, the tricky part is communicating with exacting kindness—that is, being gentle while also direct. There’s a very hard line between supporting animal suffering, and removing oneself from it. So I want that to be clear when I talk about veganism. But I don’t want to overstep or to distract the dialogue.

It’s a challenge, for sure. I never want my sensitivity to be mistaken for weakness. My conviction should be strong, but my character ought to be relateable and friendly. After 16 years of ‘that veg-life,’ I still struggle to finesse this balance. But if I can muster up some compassion from within, I can speak directly and with tact.

Getting the Point Across with the Right Attitude

Tone-policing is a huge pet peeve, but I recognize that it helps advance a conversation if I can check my tone. The light and color with which I capture an idea will forever impact how a person thinks of vegans/veganism. So I’ve taken it as a mission of mine to paint that picture bright and colorfully. And I use a few strategies to keep me on track. As a recap, I find it’s easier to communicate effectively if I:

With these tricks, I can combat the preachy, angry vegan stereotype and hopefully crack away at animal exploitation’s foundations.

And now it’s your turn. I wish you great success in perfecting your approach to talking about veganism and the many reasons which motivate you to embrace this lifestyle. Onward, my animal loving vegan friends! Kill ’em with kindness!